skip to main | skip to sidebar

If you’ve ever ordered a great piece of meat at a reputable steak-house and wondered why it tastes so much better than what you make at home, the answer is that steakhouses serve dry-aged steak. (If you haven’t, then you MUST go try it. My favourite steakhouse in Vancouver is Gotham Steakhouse & Cocktail Bar – try the porterhouse or bone-in rib steak!) Dry-aging is a process in which large pieces of meat are hung up for a period of a few days to a couple weeks to allow moisture to escape as well as tenderizing the meat at the same time. When the water is removed from the meat, it creates a much more concentrated and flavourful meat. The aging process also breaks down the connective tissue to create a more tender steak. There are many methods that I have seen people use on many websites and YouTube channels. However, I was reluctant to try any of the methods because of my concerns about bacteria and mold. Many of these internet methods would use cheesecloth wrapped around a steak that needed to be changed very often, washed, or thrown out, or even just sitting in a pan for a few weeks. Shocking! There is a very fine line between aging and rotting. Commercial meat lockers are much more consistent and colder than your standard fridge. Also, humidity plays a large factor in whether your dry-aging process at home will be a success.

The commercial meat market is dominated by wet-aged beef. The process of wet-aging beef involves vacuum sealing the meat right after slaughter and letting the meat sit for at least a week before it is cut into more manageable sizes and sold. This method is preferred by commercial meat companies because dry-aging beef, though it creates a more buttery and meaty taste, reduces the weight of the meat because of moisture loss and having to trim back the crusty outer surface, and thus, reducing profits. For this reason, dry-aged steak is often harder to find as well as quite a bit more expensive than wet-aged beef.

I came across a website, http://www.drybagsteak.com, which claims to have a special bag, called the Drybag Steak that allows moisture to escape from your steaks, but keeps bacteria and other harmful substances out of the bag. I just had to try it! Note: I am in no way getting paid for this review. However, the staff at Drybag Steak were kind enough to send me a starter kit to try out.

For this experiment, I chose a wet-aged Angus New York Strip loin, which I purchased from a local butcher shop, Windsor Packing Co. on 411 Main Street of Vancouver, BC. I mentioned to them that I was trying to do an experiment with dry-aging using the Drybag Steak. They were very helpful and sounded genuinely interested in helping me to succeed with my experiment. The butcher recommended the Angus New York Strip loin because of its fat-cap, which protects the meat during aging. Fair enough! With my wallet about $60 lighter, I walk out with my 5 Lb piece of meat.

The following video shows the process I used to prepare my meat for dry aging.


I sealed my steak into the Drybag on August 25 and I trimmed and cut the steak on September 12. On August 30th, 5 days into aging, this is what my strip loin looked like: 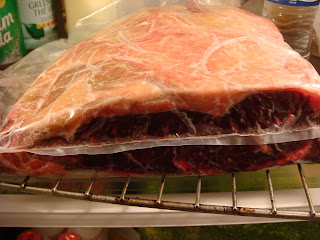 On September 7th, 13 days into aging, this is what the strip loin looked like: 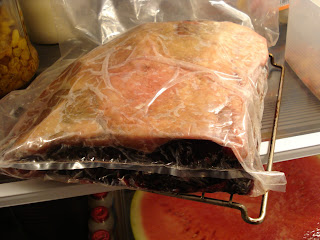 On September 12, I decided to pull it out of the bag, trim it up (approximately 1/4" shave), and cut my Angus New York strip loin steaks! Click on the images to enlarge. 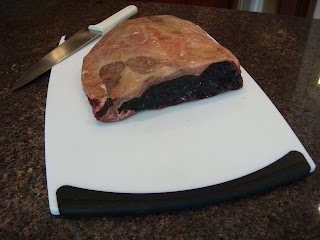 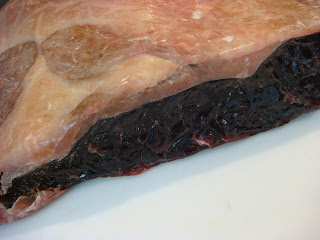 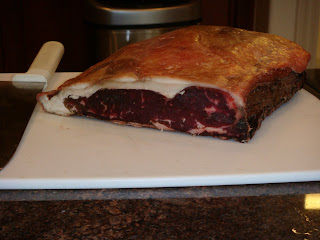 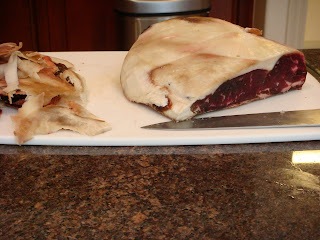 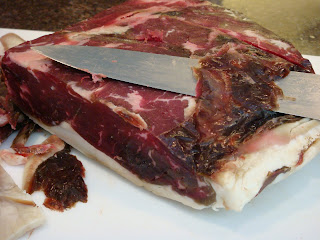 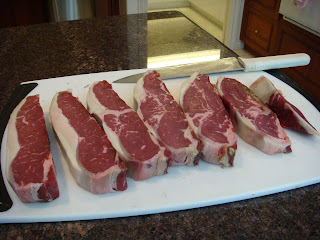 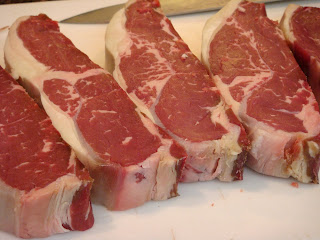 I put the steaks into the generic vacuum bags that came with the starter kit. They work wonderfully for freezing any steaks that you may want to save for later. I found that it helped to put an upside-down deep plate underneath your meat when you're vacuum sealing so that the bag does not scrunch up on one side. 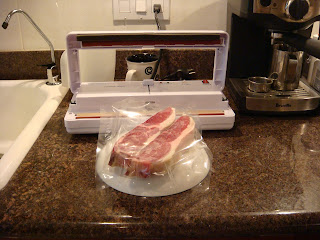 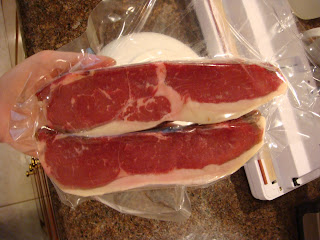 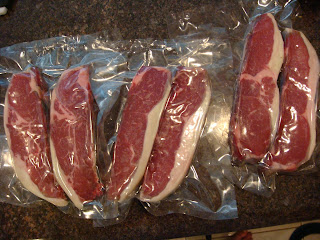 Overall, I was very pleased with the results of the Drybag Steak. I prepared the steaks with only salt and pepper and seared it in a pan to medium-rare (and IMO, the best way to enjoy a steak). It was beautifully tender and flavourful. The beefy flavours really concentrate during aging. The fat was tender and melting into the meat. One thing that I noticed when handling the dry aged steaks was that the fat seems to melt so much more easily than that of non aged steaks. Whenever I touched the steaks with my hands, there would be a very oily gloss on my fingers. I can't wait to try it with a ribeye roast.

Posted by Recipes by Sarah at 5:02 PM

Recipes by Sarah
This blog is just purely a hobby of mine to upkeep. I like to post recipes that I try and know to be great. I rarely cook with measurements unless I am baking. I have tried my best to estimate the amounts of ingredients that I put into my food, but I would advise that you use your own discretion when trying these recipes!